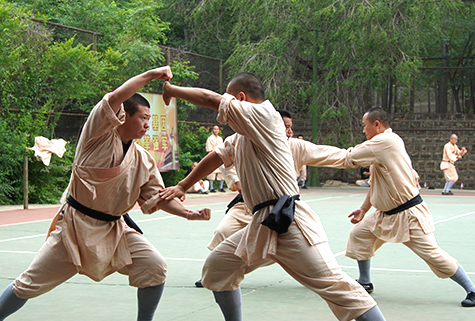 Shaolin Kungfu Monk Corps’s predecessor was Shaolin Warrior Monks. In the reign of Tang emperor Li Shiming (598-649 A.D), indebted to the thirteen monks for saving his life, the emperor granted the privilege of owning warrior monks to Shaolin Temple.

Late in Song Dynasty, Emperor Taizu (founder of the Song Dynasty from 960 to 976) paid a visit to Shaolin Temple, and then dispatched batches of military troops to the temple, for training warrior monks as well as mastering the Shaolin martial arts.

During the Yuan Dynasty period, the then Shaolin Abbot Fuyu was appointed as Grand Preceptor by the royal court, who greatly advocated for warrior monks’ Kungfu practices.

Ming Dynasty witnessed the largest ever scale of warrior monks in Shaolin Temple, with over a thousand of standing warrior monks. More than 500 of enlisted warrior monks won honor for fighting back Japanese pirates.

In the Qing Dynasty, the royal court suspected the temple of overturning Qing Dynasty and reinstating Ming Dynasty, and therefore prohibited the practices of martial arts, which led to the downfall of Shaolin warrior regime. However, as having a fondness for Kungfu, some warrior monks practiced covertly by themselves.

The period of the Republic of China brought a revival of Shaolin Kungfu. While visiting Shaolin Temple, the then-president Chiang Kai-shek was enthralled by the demonstrations of warrior monks.

During the most prosperous period of Shaolin Temple, the number of standing warrior monks reached over one thousand. Warrior monks were enlisted in the army many a time and contributed to the victories of wars against aggressions. Especially in defending the invasion of Japanese pirates, they had won great honor to Shaolin Temple, Shaolin warrior monks and Shaolin Kungfu.

After the founding of the People’s Republic of China, especially after the Third Plenary Session of the Eleventh Central Committee, the Chinese government ‘s religious policies was carried out completely and traditional sports was also in gradual rise. In 1987, in order to inherit and promote Shaolin Wushu and satisfy the need of learning Shaolin Wushu, Master Shi Yongxin formed Shaolin Wushu Team. In 1989, Shaolin Wushu Team was renamed as Shaolin Kungfu Monk Corps. Kungfu Monk Corps followed the historical pattern of Shaolin warrior monks, only that its function has turned into performing Shaolin Kungfu to the aim of spreading traditional Kungfu as well as authentic Shaolin Chan culture.

Nowadays as the inheritor and ambassador of Shaolin Kungfu and Chinese culture, Shaolin Kungfu Corps has been invited many a time to the European, Asian and American countries and performed authentic Shaolin Kungfu for people over 60 regions and countries.