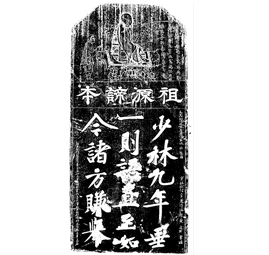 the stone tablet was carved during the Northern Song Dynasty, 1.58 meters tall and 0.62 meters wide. Its inscriptions were written by Huang Tingjian. There are sixteen characters carved on the tablet, running script, powerful, vigorous and free, with the character’ s height of 22 to 25 centimeters or so. The Bodhidharma Facing to the Wall Painting was carved on the top of the stele. It stands in front of the western pavilion in the Founder Nunnery now.