Damo Mianbi Zhi An Stele during the Northern Song Dynasty

It was carved during Daguan period of the Northern Song Dynasty (1107-1110), 1.56 meters tall and 0.78 meters wide. Five-Chinese character Inscriptions “Damo Mianbi Zhi An” (the nunnery of Bodhidharma facing to the wall) were written by Cai Bian (Cai Jing’ s brother) with the height of the character around 0.35 to 0.27 meters. The inscriptions are regular script, vigorous, forceful and stylish. The back of the stele has preface written by Zhou Nan and so on during Jiajing period of the Ming Dynasty. The stele was set up by master Fahai, previous abbot of Shaolin Temple, and was carved by Nie Yang. The stone tablet stands in front of the Founder Nunnery Now. 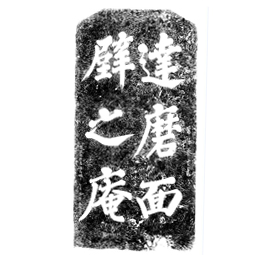